“I will kick your ass from here to kingdom come until I’m 80 years old”, said Steven Roth to his 15 year old student with special needs. Shocking video of a teacher bullying his student caught on tape.

Childhood bullying is not only a problem between children, it is also a problem between adults and children. Often these adults were themselves a victim of bullying at some point in their childhood. Bullying is contagious and be passed on from parent to child, from sibling to sibling, from classmate to classmate and so on. Something must be done to break the cycle and proliferation of childhood bullying. the national media has given bullying more attention lately and our government is trying what it can to help. Harsher penalties are being given and more education is being given on the subject. The video below is disturbing and really hits home how deranged and sick some people are and how bullying is a serious problem that we and our children all face.

15-year-old special needs student Julio Artuz is bullied by his teacher. According to ABC News, Artuz had already informed his parents that his teacher was abusive to him. His parents didn’t believe him and his father stold him to prove it. Thats exactly what young Julio did when he decided to video tape his teacher calling him a “tard”.

Martial Arts helps teach children to stand up for themselves and gives them leverage against childhood bullying. Technique and martial skills necessary to defend oneself against a bigger and stronger opponent are certainly important, but more important is building a child’s confidence and self esteem. Confidence and self esteem are not developed quickly. It takes time and mentors that know how to instill it properly which is exactly what Baltimore Martial Arts provides.

Baltimore Martial Arts has a top notch kids martial arts program that is perfect for helping children develop self confidence, self discipline and the courage to stand up against big bullies. We have heard countless stories from our kids and parents about how they thwarted big bullies in their schools and in their neighborhoods. Instructor and owner Gary Berger draws form his own experiences as a child and teaches his students the lessons that he learned as a kid learning martial arts and how martial arts helped him against big bullies and childhood bullying.

Baltimore Martial Arts and Fitness students competed at the North American Grappling Association (NAGA) in Landover, Maryland. on Saturday October 8th, 2011. It was a nail bitting day with a few more losses than wins, but in the end we came out stronger and better from the experience.

Baltimore Martial Arts junior competitors Justin Pyle Jr. and Ben Metzler competed in the junior advanced BJJ gi and no gi division. Both young men had very tough matches against world ranked competitors. Justin Jr. also known as the one man army, succumbed to some tough submissions but put on a good effort. This was Ben Metzler’s first NAGA tournament. Ben had one win and three losses. Oscar Heredia competed in novice and had some very tough matches. Two losses came at the last second and one loss was decided by an advantage. Oscar was awarded a sword from the referee because of his performance. Oscar was away from training for the summer but he is back in training and practicing hard. 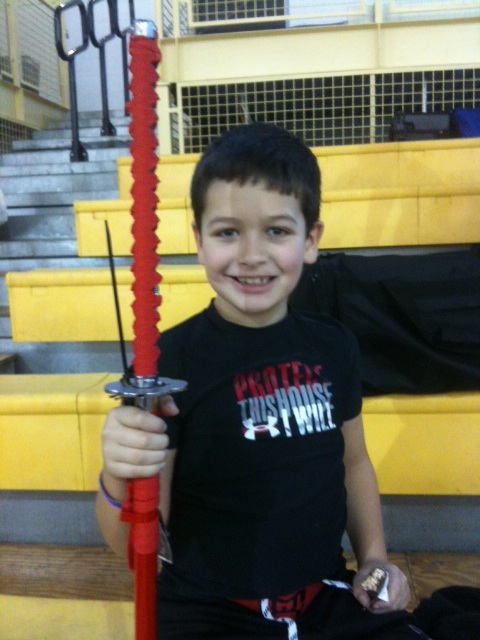 Ian Rathmell was also away for the summer but he decided to compete anway. He was very brave in all of his matches and showed determination throughout the day. Wins didn’t happen for Ian or Oscar but showing up made them winners in their coaches and parents eyes.

Baltimore Martial Arts junior BJJ competition team will be in training for more upcoming jiujitsu tournaments. Our team has not been doing as many NAGA tournaments as we have in the past. Lately we have been competitng in the Junior Grappling tournaments which offer a double elimination format thus allowing our kids to compete in more matches. Kids can enter up to four different divisions in Junior Grappling. Justin Pyle Jr has had as many as 17 matches (maybe more?) in one day. The next Junior Grappling Association tournament will be held in Virginia Saturday October 15th 2011. The Junior Grappling Association 2 day National Championships will be held in Fredericksburgh, Virginia November 12th-13th. This event will award competitors that have accumulated points throughout the 2011 BJJ competitive year. 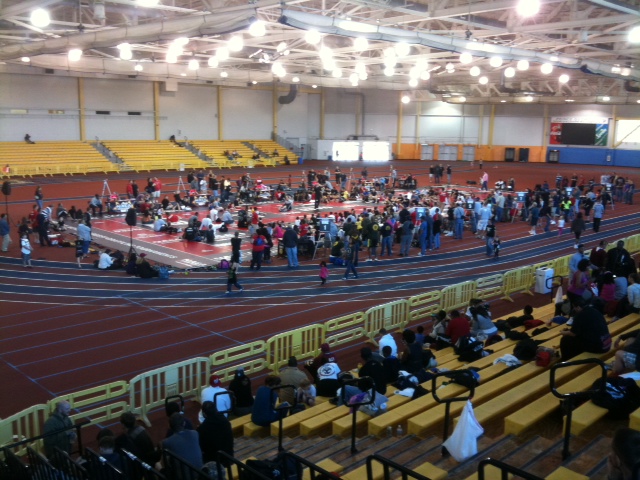 Turnout for NAGA Landover Maryland appeared to be half of what it was last year. This photo was taken at about 10:30 AM while the rules discussion was taking place. Rules discussion took about an hour which for many who are already familiar with NAGA rules can be lengthly. Im not sure why the turn out was less. Some people that I talked to suggested that it was due to the economy. Maybe you have an opinion???

Justin represented the Baltimore Martial Arts Junior Grappling Brazilian Jiu-Jitsu competition team. Single handily he won a first place team trophy and the “Iron Grapplers” cup which is awarded to the grappler who had the most matches during the event. Justin had 22 matches which was a new Junior Grappling record. Summertime has been tough on our junior BJJ competition team with so many kids on vacation and in summer camp, however our team is rallying for the next Junior Grappling tournament in Millersville, Maryland on August 20th, 2011.

Justin is an exemplary young man who not only has courage and the indomitable spirit, but also has compassion and a maturity which many teens now-a-days are lacking. Justin attends BJJ and Judo classes often four and sometimes five days a week. He assists Sensei Gary Berger with some of his BJJ classes for the younger children for which he is an admired role model.

Justin’s dad is a behind the scenes hero. We call him our dojo dad because he is always at the school either bringing Justin to class, training in Aikido or helping out in some capacity. Justin’s dad also tirelessly drives Justin to all of his numerous jujitsu tournaments which sometimes are hundreds of miles a way.

Brazilian Jiu-Jitsu and the martial arts in general has repeatedly been shown to help kids who may have difficulty adjusting to life in school or at home. Brazilian Jiu-Jitsu helps children develop self confidence, build integrity and also gives them an ability to make better decisions. If you have a child or teenager that you think would benefit from our jujitsu programs please call.

For more information about Children’s Brazilian Jiu-Jitsu classes please contact us at 410-465-7799 or Email: baltimoremartialarts@yahoo.com

Looking for a map?

A mother’s letter concerning her son’s accomplishments at Navy Sea Cadet School and how his Brazilian Jiu-Jitsu training at Baltimore Martial Arts has helped him.

A quick note regarding Ben’s first training (Seaman Recruit Training) which he just completed on Saturday. Ben was named Battalion Honor Cadet (highest achievement for all of the companies of recruits), was awarded the Academic Excellence Award for scoring the highest on the written exam and tied for first in their final run of 9.2 miles in a time of 75 minutes. He also excelled in his other Physical Readiness Testing. While we certainly know that much of what he brought to the table came from the training received at his Division, we also recognize how the physical and mental/emotional training he’s receiving at the Baltimore Martial Arts Academy played a huge part in his success. Many thanks to you and your staff for your excellent work with the students.

Our junior competition team has been on a roll winning the AA team trophy award five out of the last six tournaments. To win the AA team BJJ trophy award you must have between 7-12 competitors. Points are awarded to a team based on individual place finishing. More points are awarded to advanced competitors. Special trophies are given to competitors that achieve the most submissions and/or have the most matches. Several of our kids have whom these trophies on numerous occasions. Justin Pyle Junior (center) once had 18 matches in one day.

Junior Grappling is a special Brazilian Jujitsu tournament in that it offers kids many divisions in which to compete and gives them many matches throughout the day. There is gi, no gi, boys, girls and boys / girls divisions. The format is double elimination which means a child wrestles until they lose 2 matches or wins their division.

At the end of the day our kids were very tired. In the picture above only a few stayed to receive the team trophy, but given that it was Saturday and many families had to drive 2 hours to get back home for Memorial Day it was understandable.

Baltimore Martial Arts next junior BJJ travel tournament will be at the Good Fight in Baltimore on June 8th.

Baltimore Martial Arts now has a junior wrestling program. Classes are held every Tuesday 4:30-5:30. Anyone is invited to attend or try a free class. Wrestling skills are very helpful to a BJJ competitor especially in no-gi grappling. Our kids demonstrated this at the last Junior Grappling tournament.

Brazilian Jiu-jitsu fosters the competitive spirit in children. Winning and loosing is a part of life and BJJ helps kids cope with these challenges. Good sportsmanship is also practiced through team participation and showing courtesy and respect to one’s opponent. If you would like to introduce your child or children to Brazilian Jiu-jitsu, give us a call to schedule a free consultation and free class.

Baltimore Martial Arts “Team Xtreme” representing Renato Tavares from American Top Team in Vero Beach, Florida recently competed at the Junior Grappling Association tournament in Millerville, MD April 16th, 2011. Team Baltimore Martial Arts won
the Second place AAA team trophy award (10 or more competitors). Our junior grappling team consisted of ten children ages 5-13 and beginner to advanced. Our junior grappling team won numerous gold medals including the “Iron Grappler” cup which was awarded to the grappler (Justin Pyle – 10 matches) who had the most matches for the day. Missing from photo is Kaylin, Tyler and Ryan who had to leave the event early.

Five year old Lucas Lopez competed in his second tournament with Baltimore Martial Arts. He encountered his first loss in many matches. His loss occurred in the “Dragon Open” division. Below is Lucas in action.